After the success of Lightning Jelly we teamed up again with the BBC to create a second series: Thunder Jam! This series would focus on bringing music into the youngest classrooms across the UK. We created a new cast of kids to adventure through rain forests, comic books and space, meeting many musical maestros along the way. 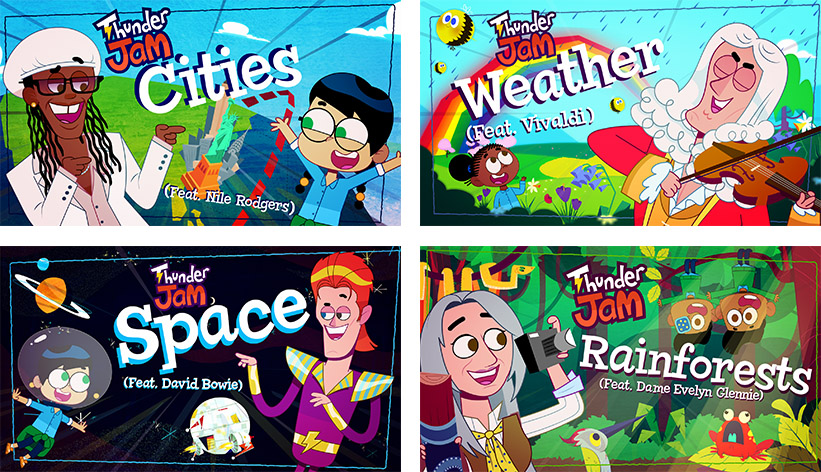 With series 1 under our belt, series 2 was a fantastic opportunity to hone our production pipeline and bring even higher production values. With a flurry of famous faces being attached to the project it was our job to bring their animated alter-egos to life. Joss Stone, Omar, film composer Daniel Pemberton, Dame Evelyn Glennie and Nile Rodgers joined the campaign to get kids making some noise!

Vivaldi’s the name. But you can call me V!

Detailed animatics like the clip above create a concrete blueprint for each episode which informs every other step of the animation process. Working from the script, we sketch out the whole episode with dynamic camera moves to take the viewer on the same wild ride as the Thunder Jam kids.

We thoroughly enjoyed dreaming up the animated alter-egos of all the celebs involved in the show. It is weird to think that kids across the land’s first introduction to David Bowie may well be our incarnation of him!